It’s too soon to give up on No. 1 pick Yakupov 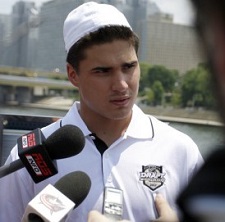 If the NBA held its young stars-in-training to the same standard as the NHL, Kobe Bryant would have been sent packing by the Lakers after his second year in the league, and Tracy McGrady might have been declared a bust in Toronto four years before he led the NBA in scoring in Orlando.

At least that’s what I’m gathering from western Canada, where Edmonton World columnist Jim Matheson wonders if the Oilers are ready to cut ties with Nail Yakupov, their 20-year-old winger who is in his second season in the NHL after being drafted No. 1 overall in 2012:

What should the Edmonton Oilers do with Nail Yakupov?

Do they work with him and take several steps back, consider him just a project like any other draft pick — not the first name called — and hope he finds some hockey sense to go with his hockey skill? You need both.

Or do they seriously investigate trading a 20-year-old with 111 games on his NHL resume?

Matheson isn’t saying Yakupov is hopeless, and in fact praises the prospect’s skills and passion for the game — though he questions whether Yakupov will develop the on-ice savvy to match his ability. The columnist mainly brings up Yakupov’s name as a trade possibility because the rebuilding Oilers are strong at the wing position but have pressing needs elsewhere on the ice.

Still, even in our increasingly impatient sports world, I don’t think a No. 1 pick in the NBA, NFL or MLB would even be mentioned in trade talk not two full years into their tenure with the team that selected them.

Imagine the Lakers trading Kobe after his second year, in which he was still a backup and had some high-profile failures in the playoffs. Or the Raptors giving up on T-Mac, who was coming off the bench in his second year and averaging less than 10 points per game. Kobe and T-Mac were, like Yakupov, drafted when they were 18, but neither was the top overall selection. Both were given time to work through their early struggles, and both developed into Hall of Fame-worthy superstars.

Even if you overlook the fact that Yakupov — who hails from Russia and is the highest-drafted Muslim in NHL history — led all rookies in scoring as an 18-year-old, scored his first goal in just his second NHL game, picked up a Rookie of the Month award during that lockout-shortened season, and recorded a hat trick in a game against the Vancouver Canucks (a playoff team that year), you’d still have to admit it’s pretty early for the Oilers to let him go.

Yakupov has undoubtedly struggled in Year 2, with 11 goals and 13 assists in 63 games and a -33 on the plus/minus scale through Monday’s schedule. But at the same time, his whole team has struggled; the Oilers are in last place in the Western Conference and have allowed more goals this season than every NHL team except one. The immediate success of some other young NHL stars around Yakupov’s age has raised the level of expectations and put Yakupov under even heavier scrutiny, but just because he’s behind other 20-year-olds doesn’t mean he’s behind the curve for future NHL stardom.

Considering his age, skill level and potential, it’d be in the Oilers’ best interest to keep Yakupov on the roster rather than make a move now they’ll most likely regret later.