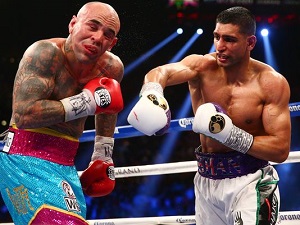 Amir Khan promised to put on an impressive performance against Luis Collazo on Saturday night — the kind of performance that would put him at the front of the line to be the next opponent for boxing’s undisputed pound-for-pound king, Floyd Mayweather Jr.

Khan did his part, scoring a unanimous decision victory over Collazo at the MGM Grand in Las Vegas. But it was Mayweather’s opponent in the main event of the same card that might have done enough to keep Khan waiting. Mayweather defeated Marcos Maidana by majority decision in a fight that was so close and so exciting that almost everybody is clamoring for a rematch. Mayweather himself even indicated afterwards that he’d be fighting Maidana again. Which means Khan, the former light welterweight world champion, would have to stay in the backseat.

“People want to see that fight between me and Floyd,” said Khan, a British Pakistani Muslim. “He’s fighting guys who are strong, but styles make fights, and I believe my style would cause Floyd a lot of trouble.”