Ramadan will cost Amir Khan a fight with Floyd Mayweather 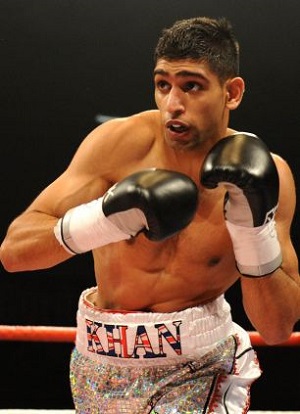 For about an hour or so on May 3, Amir Khan seemed to be the leading candidate to be Floyd Mayweather Jr.‘s next opponent.

On that night, Khan scored two knockdowns in an impressive unanimous-decision victory over rugged challenger Luis Collazo on the undercard of Mayweather’s main event showcase against Marcos Maidana. But the Mayweather-Maidana fight ended up being so good, the public has clamoring for a rematch ever since.

That match has not yet been made, but with this week’s announcement from Mayweather’s camp that the undefeated welterweight champion will have his next fight — opponent and location to be determined — on September 13, Khan has essentially been ruled out.

Khan, a British-Pakistani Muslim, had already said earlier this month that he could not realistically fight so soon after the month of Ramadan.

Fasting during Ramadan is one of the five pillars of Islam. This year, Ramadan goes from about June 28 to July 27 according to the Islamic calendar. During that time, Khan, along with many of the world’s billion-plus Muslims, will be abstaining from food and drink during daylight hours. For a professional boxer whose job is to report to the ring in prime physical condition, clearly that schedule would make it tough to take on the pound-for-pound best fighter in the world in mid-September.

“I can’t take that (September) fight,” Khan said in an interview leading up to the Collazo fight. “I need a couple of months to work on my strength and conditioning.

“If Floyd wants to fight in November sometime, if it can’t be done in September, then I’m happy for November,” Khan said. “If not, then it’ll have to happen in the future. If it never happens, everyone will have to just think, ‘What would have happened if (Khan) had fought Floyd?'”

Mayweather spokesperson Leonard Ellerbe may have sounded callous in his recent interview with ESPN in which he stuck hard and fast to their team’s desired date — mentioning Khan by name and basically saying it’s September or nothing for the former two-time light welterweight champ — but I don’t think it’s necessarily a case of the Mayweather camp being insensitive to Khan’s religious practices.

Mayweather owes it to himself to fight when he feels most comfortable, especially when he’s earned the right to be the one in the position to call the shots. There will be other opportunities for Mayweather to give Khan a fight that aligns better with Khan’s schedule.

Rather than expect Mayweather and his team to accommodate one potential opponent when they have several candidates (and it’s not like Mayweather-Khan is a gotta-see-it fight on the level of Mayweather-Pacquiao), I would instead focus on the admirable commitment of Khan not to compromise his deen (way of life) when it could mean landing the biggest payday of his career and a chance to make history by defeating the undefeated Mayweather.

That in itself is a more brave and noble act than stepping in the ring with Mayweather, the man some are already calling “The Best Ever.”