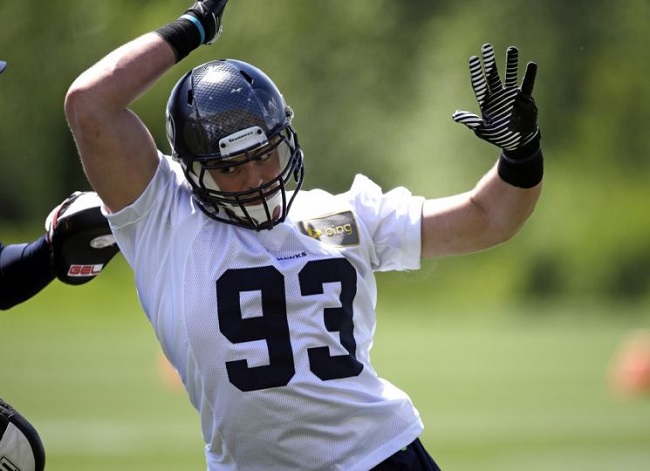 Adham Talaat runs through a drill during Seahawks’ rookie camp.

When his name wasn’t called during the NFL draft, Adham Talaat‘s pro football journey did not come to an end. His work was just getting started.

The son of Egyptian immigrants to the U.S., Talaat was raised Muslim and is mostly deaf. Despite a physical condition that some people might consider detrimental to a career in football, Talaat turned himself into a legit NFL prospect during his career at Gallaudet University, the nation’s first college for deaf and hard of hearing students. The 6-6, 270-pound defensive end attracted a handful of NFL teams to his Pro Day workout, and was projected as a possible mid- to late-round pick.

But likely due to question marks about the level of competition he faced in college (Gallaudet is a Division-III program) and likely due to some doubt that a deaf player can succeed in the league, Talaat was not chosen during the seven-round draft that concluded on May 10.

Soon after the draft, however, Talaat was invited to the Seattle Seahawks’ rookie camp. The reigning Super Bowl champions already have one deaf player on their roster in fullback Derrick Coleman. But they’re also stacked on defense. Talaat reportedly performed well at camp — head coach Pete Carroll said after one practice, “Talaat did a really nice job of showing his toughness, and showing his great effort and all of that. No problems at all, everything was very smooth as far as communicating and working through the installation and all of that” — but the team did not pick him up.

This week Talaat will get another shot at making a roster, as he has been invited to rookie camp with the Kansas City Chiefs. Another playoff team from this past season, the Chiefs have one prominent Muslim player on their roster in defensive back Husain Abdullah. Kansas City also has a solid defense, but not as much talent across the line as Seattle, so Talaat probably has a better chance at sticking with the Chiefs.