11 Muslim players to watch at the World Cup 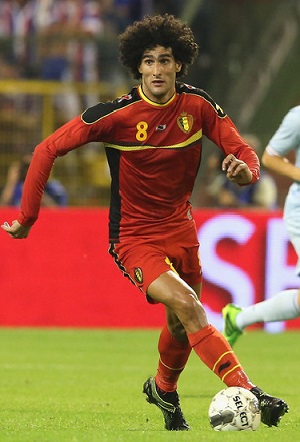 Muslim players have been an integral part of the fabric of soccer — ahem, football — for as long as the game has been the international pastime.

It’s only natural that the world’s most popular sport and the world’s second-largest religion would intersect, but it seems only recently has mainstream Western media acknowledged the impact Muslim players are having on the pitch. In the summer of 2013, the BBC produced a documentary special titled “The Muslim Premier League” which — while both well-done and informative — came off like a curious reaction to a supposedly sudden influx of Muslim players in the English Premier League, the world’s most recognizable football league.

Less than a year after that documentary aired, the 2014 World Cup kicks off this week with an abundance of Muslim players involved.

Representing some countries you would expect (Iran, Nigeria) and some you might not (Switzerland, Netherlands), Muslim players dot the football landscape and should figure prominently into which team claims the sport’s most coveted trophy at the sport’s brightest showcase. Here are a starting lineup’s worth of Muslims to watch in Brazil:

Rahman Ahmadi, goalkeeper, Iran: The 33-year-old vet has spent his entire pro career in the Iran Pro League, where he finished second this season with 15 shutouts for Sepahan. Previously a backup on the national team, Ahmadi finally took over the starting job last year and was a veritable brick wall in helping Iran qualify for this World Cup.

Darijo Srna, defender, Croatia: The captain of the Croatian squad has a two fistfuls of championship hardware from the Ukrainian Premier League. Along the way he’s reportedly turned down offers from international powerhouse clubs like Chelsea (EPL) and Bayern Munich (Germany).

Kolo Toure, defender, Ivory Coast: The older brother of international superstar Yaya Toure (EPL’s Manchester City), Kolo has had an accomplished career in his own right, most recently with Liverpool of the EPL. He is in his 14th year playing for the Ivory Coast national team, for which he has scored six goals.

Bacary Sagna, defender, France: Carmelo Anthony, Dwight Howard and LeBron James are a few of the athletes who can relate to what this past year must have been like for Sagna, whose season with Arsenal of the EPL was overshadowed by talk of contract extensions, transfer fees, free agency and — when it became clear Sagna planned to test the market — endless rumors about which club and in which country he’d be playing for next season. But just like Melo, Howard and LeBron, the constant chatter is warranted because Sagna is among the best on the planet at what he does.

Sead Kolasinac, defender, Bosnia & Herzegovina: The 20-year-old appears to be the heir apparent to current national team captain Emir Spahic, 33, also a Muslim who plays in the defensive backfield. Kolasinac, who plays for Schalke 04 in Germany’s Bundesliga, is embarking on his first major competition for Bosnia & Herzegovina after previously playing for Germany on the international youth level.

Marouane Fellaini, midfielder, Belgium: He’s the one with the Afro that you might confuse with LMFAO’s Redfoo if you happen to flip to a Belgian match and aren’t sure what you’re watching. This season was kind of a disaster for Fellaini, an established star with Everton (EPL) who transferred to Manchester United and struggled mightily to the tune of zero goals in 16 appearances and quite a few DNPs. Working with a fresh slate now, and with no shortage of opportunities given Belgium’s young roster, the 26-year-old Fellaini could use this summer to get his groove back.

Mesut Ozil, midfielder, Germany: Even non-soccer fans should recognize Ozil, whom adidas has put out front — right next to Lionel Messi (Argentina) and Luis Suarez (Uruguay) — as one of the faces of its World Cup promotional efforts. Like Fellaini, Ozil was also considered a disappointment this season in the EPL after a high-profile and expensive transfer (from Spain’s Real Madrid); although Ozil’s version of “struggle” was more like an incredible player performing merely like a pretty good player. He’ll be fine.

Paul Pogba, midfielder, France: Think Kevin Durant on the soccer pitch. Too tall, too smooth and too explosive for most opponents to keep in check, the 21-year-old helped Juventus to a Italian league (Serie A) championship three-peat this season. Now he’s potentially on the verge of becoming France’s go-to guy, as fellow Muslim star midfielder Franck Ribery could miss the World Cup with a back injury.

Ahmed Musa, forward, Nigeria: When he was 17 years old, Musa broke the Nigeria Premier League’s single-season scoring record when he deposited 18 goals for Kano Pillars. From there he went on to play two years in the Netherlands, and for the past two years Musa (now 21) has been a standout for CSKA Moscow in Russia. Another young star who could use this World Cup stage as his international breakout.

Edin Dzeko, forward, Bosnia & Herzegovina: After teaming with fellow Muslim star Yaya Toure (Ivory Coast) to help Manchester City win an EPL championship this season, Dzeko now takes his place as the unquestioned marquee name on the Bosnia & Herzegovina roster. He lit up the nets for 26 goals with Man City this season, and it’s safe to predict he’ll knock in at least a couple during this World Cup.

Xherdan Shaqiri, forward, Switzerland: The judge-a-book-by-its-cover crowd probably wouldn’t peg Shaqiri as a Muslim, as the powerfully-built Swiss striker has the whole pop-star quarterback look going. In two seasons with Bayern Munich (Germany) he’s won a Bundesliga championship, a UEFA Champions League title and a FIFA Club World Cup, scoring 15 goals in that span, plus a handful of goals while playing for his national squad. The man who sends laser shots off his left foot has the skills and the marketability to be one of this World Cup’s defining stars.