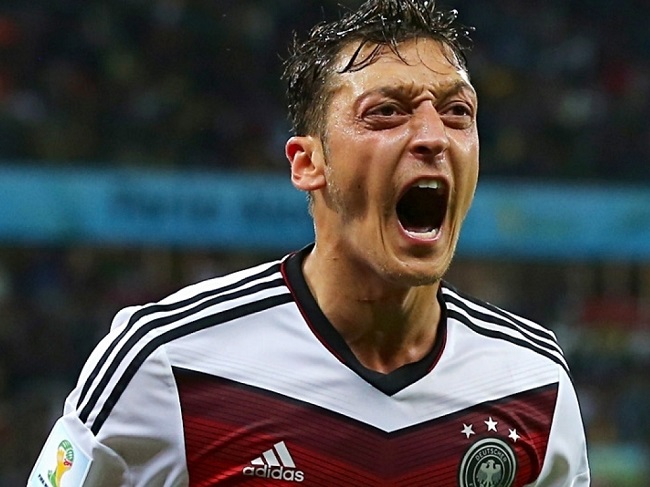 When it was all said and done, no one was thinking about the fact that embattled German star Mesut Ozil‘s standout moment from the 2014 World Cup final was misplaying a goal-scoring opportunity late in the second half against Argentina.

After substitute Mario Gotze‘s extra-time goal in the 113th minute proved to be the title-winning score, all the focus was on the complete team effort — of which Ozil played an integral part throughout the tournament — that resulted in a 1-0 victory and Germany’s fourth world championship.

Led by goalkeeper Manuel Neuer, who was named best keeper of the tournament, as well as a stingy defense and an offense that was explosive when it needed to be — e.g., their 7-1 semifinal destruction of Brazil — Germany somewhat crept up on the field and on the media as a championship favorite, but in hindsight they should have been a popular pick.

Ozil, a practicing Muslim, had one goal and one assist in Germany’s seven World Cup matches, and completed over 78 percent of his passes as a midfielder. For as big of a name he is on the international soccer scene — Ozil was one of the faces of adidas’ World Cup ad campaign — his play in Brazil was understated and underrated, as described by Rant Sports columnist Josh Sippie:

He’s one of the most socially reserved players off the field, but when he steps onto the pitch, he is an artist in his play. Ozil put together some beautiful plays in the 2014 World Cup final against Argentina. He sees passes that no one else does, particularly defenders, seeing as how they always seem to find their mark. This is why Ozil is was the German Player of the Year last year.

But this is old news if you’ve been following Ozil’s World Cup run. Throughout the tournament, he’s put up a 78.6 percent pass completion rate. While it was Bastian Schweinsteiger’s tumbling, time-wasting antics and Mario Gotze’s extra-time heroics that stole the show and garnered the spotlight, Ozil still gets very little talk from analysts and experts.

Just because Ozil isn’t rolling around on the ground, taking punches and scoring epic goals, doesn’t mean he isn’t one of the most important players on a team that relies so heavily on functioning as a cohesive unit. There’s a reason why Ozil is at the most central position of that unit, and there’s a reason why his teammates seek him out then they have the ball.

Ozil is usually recognized as one of the best players in the world, but this past year he struggled on the pro level with English Premier League side Arsenal after coming over from Real Madrid (Spain) for a club record $72 million transfer fee.