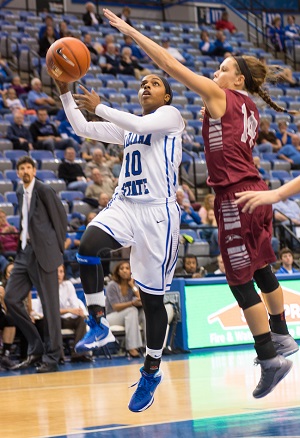 Basketball’s international governing body met on Wednesday in Spain prior to the start of the 2014 FIBA World Cup, a scheduled session that had received worldwide attention because of one agenda item in particular: A planned review of the controversial FIBA rule that prohibits certain “headgear” on the court.

While Article 4.4.2 of the FIBA Official Basketball Rules does allow headbands — e.g. those worn by the likes of LeBron James and Maya Moore for Team USA — it doesn’t allow other headgear such as hijab headscarves, turbans or yarmulkes. Which means Muslim women, Sikh men and Jewish men competing in FIBA-endorsed basketball games are breaking the rules simply by displaying their faith.

The rule has been on FIBA’s books for years, but had only recently been under heavy scrutiny after organizations like the Council on American-Islamic Relations (CAIR) and the United States Olympic Committee (USOC) made their objections public, and after the stories of former U.S. college star Bilqis Abdul-Qaadir and Bosnian-American pro Indira Kaljo had been brought to light.

Wednesday’s meeting did not result in a decision being made about Article 4.4.2. From Around the Rings:

In a statement, FIBA said “because of the importance of the matter, the Central Board decided that it requires further analysis before a final decision is made.” No new timeline was given for a decision, but FIBA said its Technical and Legal Commissions would study the rule before presenting to the Central Board.

Though disappointing that FIBA couldn’t make what seems like an easy decision to drop or modify a rule that is pretty clearly discriminatory, at least a change wasn’t outright rejected. Progress might be slow, but at this point it still seems like progress is being made and change is on its way.