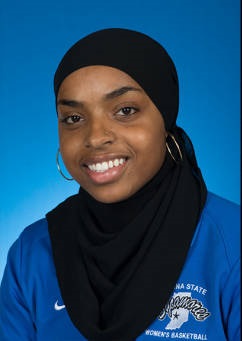 Former college basketball star Bilqis Abdul-Qaadir was among the 14 Muslim-American community leaders who met with President Barack Obama and senior officials on Feb. 4 at the White House in what has been described as a closed-door discussion about civil rights, anti-Muslim bias and Islamic extremism.

One of the meeting’s attendees, Muslim Advocates executive director Farhana Khera, said, “It was a very frank and candid exchange. I commend the president for sitting down and hearing the hopes and dreams of American Muslims.”

According to the Detroit Free Press, it was the first time the president has held a round-table meeting with Muslim-American leaders.

It was not, however, Abdul-Qaadir’s first meeting with Obama. In 2009, the same year she graduated from New Leadership Charter School in Springfield, Mass., as the state’s all-time leading scorer (boys and girls), Abdul-Qaadir was invited to the White House as part of a group for an iftar dinner with Obama during Ramadan. In addition to her basketball exploits, Abdul-Qaadir had gained some notoriety for playing the sport while wearing hijab. During her freshman season at the University of Memphis, she became the first NCAA Division-1 college basketball player to take the court in hijab.

Abdul-Qaadir received her undergraduate degree from Memphis, then with her final season of athletic eligibility in 2013-14, played at Indiana State University while working on her graduate studies. She was named to the All-Missouri Valley Conference First Team and MVC Newcomer of the Year after averaging 14.2 points for the Sycamores.

But while Abdul-Qaadir has certainly proven talented enough to play professionally somewhere in the world, her basketball career has been put on hold due to a rule by FIBA (the sport’s international governing body) that prohibits players from wearing “headgear” on the court that includes hijab headscarves. Any team in a FIBA league that puts Abdul-Qaadir on the court while she’s wearing hijab could be forced to forfeit said game.

The discriminatory rule — which essentially prevents Muslim women, Jewish men and Sikh men from honoring their religion on the court — has been in existence for years. But it wasn’t until September 2014 that renewed awareness and pressure from groups like the Council on American-Islamic Relations and US Olympic Committee convinced FIBA to review the rule and ultimately implement a two-year testing phase geared toward possibility eliminating it. But the details of that testing phase still don’t allow potential pros like Abdul-Qaadir and Bosnian-American player Indira Kaljo to sign with teams without risk.

In the meantime, Abdul-Qaadir is working at Indiana State as a graduate assistant coach with the women’s basketball program.