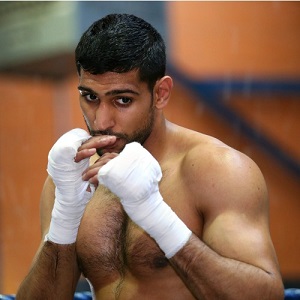 While he waits his turn for a career-defining fight — and major payday — against Floyd Mayweather Jr. or Manny Pacquiao, two-time world champion boxer Amir Khan is making business moves outside the ring.

Khan, a 28-year-old British Muslim, is opening a chain of seven halal steak houses in the United Kingdom. The Feb. 7 grand opening of the Steakout Meat House branch in Slough, an entertainment extravaganza that will include fireworks on the rooftop, is expected to draw about 3,000 guests. (Note: Halal is Arabic for “permissible” or “lawful.” In reference to food, the halal criteria specifies not only which foods are allowed for Muslims, but also how that food is prepared.)

The 2004 Olympic silver medalist and current WBC Silver Welterweight champ has been one of the world’s most politically active and outspoken Muslim athletes in recent months.

After members of the Taliban massacred an estimated 150 people at a school in Peshawar, Pakistan, in December, Khan donated money to the school, publicly called upon the Pakistani government to fight back against terrorism, and vowed to open a boxing academy in his family’s native country to provide alternative outlets for Pakistani youth. In the aftermath of the terror attacks in France in January, Khan implored British Muslim parents to educate their kids about the evils of Islamic radicalism.

“I am a British Muslim and I follow the teachings of the Quran,” said Khan, who became a father to a baby girl in May of 2014. “One of the things it teaches is not to harm other people. What we have seen happening is wrong. I don’t know where they are getting it from. It is up to British Muslim parents to stop their children joining up to these beliefs.

“They should take responsibility for showing their children a stronger path and be there to give them advice.”