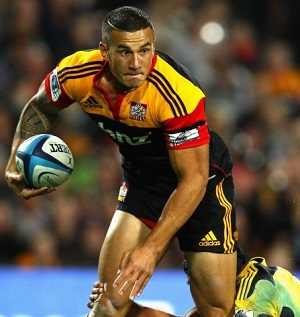 Like base-stealing specialists and sub-300-pound NFL linemen, elite two-sport athletes are something of an endangered species on the global sports landscape. Two of the last notables to achieve that status are Deion Sanders (NFL, MLB) and Bo Jackson (MLB, NFL); they belong to a very small and exclusive group that includes names like Charlie Ward (NBA, NCAA FB) and Brian Jordan (NFL, MLB).

Sonny Bill Williams is trying to add his name to that list.

The 29-year-old plays midfield for the Waikato Chiefs of the Super Rugby league in his native New Zealand, where his 6-foot-4, 230-pound frame helps make him one of the sport’s strongest players, and his fast feet help make him one of its best overall athletes.

Williams is also a heavyweight boxer with a 7-0 professional record and three knockouts. In his last fight, on Jan. 31 in Australia, he stopped American veteran Chauncey Welliver — who has 71 pro fights on his resume — in an eight-round unanimous decision. Williams’ signature boxing moment so far has been his 2013 decision victory over former world heavyweight champion Francois Botha.

In 2008, the same year he completed a then-controversial move from the Canterbury-Bankstrom Bulldogs of Australia’s National Rugby League to RC Toulonnais in France, Williams converted to Islam. He would later become the first Muslim to play for New Zealand’s world-renowned national rugby team, the All Blacks, whom he helped capture a Rugby World Cup title in 2011.

Already an established star on the field — Williams is the first rugby player to sign an endorsement deal with sneaker and apparel giant adidas — Williams is now aiming for similar stardom in the ring. But he openly admits the road has not been easy, even for a man who has been compared to none other than Michael Jordan in terms of pure athleticism. From the Daily Telegraph:

“I’ve had no amateur background. Most boxers would have sparred more rounds than I have spent inside the ring.

“I understand people expect me to be fighting top-line fighters all the time but I’m still trying to learn myself.

“When I think about the big picture, it puts me at ease. I know I’m definitely stepping out of my comfort zone and taking on a massive challenge.

“Even if people from the outside world write it off, I’m OK with it.

“I’d be stupid if I was jumping in there the likes of (undefeated Australian heavyweight) Lucas Browne at this stage of my boxing experience.

“But one day, God willing, with a lot of hard work and if all goes to plan then who knows?

“Right now, I know where I am in a boxing sense. I know what lane I’m in. I’m a realist, I know I’m not the best fighter in the world.”

Given that synopsis, it’s impossible to call Williams anything but honest.