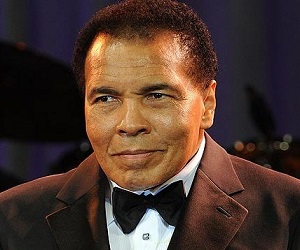 Muhammad Ali converted to Islam in 1964.

Parkinson’s disease has taken a lot from former world heavyweight champion Muhammad Ali, but it has not taken the boxing legend’s faith in Allah [swt] nor his commitment to social justice.

The 73-year-old Ali, perhaps the world’s most famous living Muslim, issued a statement for the Muslim-majority Iranian government to release Washington Post reporter Jason Rezaian, a Muslim-American who has been in prison in Tehran since July 2014 on unknown charges. Rezaian’s wife was arrested at the same time, but she was released three months later.

Ali’s statement begins, “With the Name of Allah, The Beneficent, The Merciful,” and describes Rezaian as “a man of peace and great faith, a man whose dedication and respect for the Iranian people is evident in his work.”

The champ concludes, “I support his family, friends and colleagues in their efforts to obtain his release.”