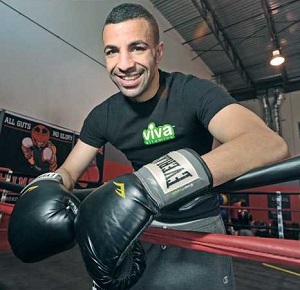 The biggest boxing event of the 21st century will draw the world’s attention to Las Vegas on May 2, when welterweight superstars Floyd Mayweather Jr. and Manny Pacquiao will step into the ring with three world championships and Mayweather’s undefeated professional record on the line.

Before the main event gets underway, the undercard will shine a light on some lesser-known boxers looking to take advantage of the opportunity to become a star in front of a massive pay-per-view audience.

One of those fighters is Said El Harrak, a 27-year-old representing California via London and Morocco. El Harrak will put his 12-2-2 (7 KO) pro record up against 11-0 (9 KO) Mayweather protegee Chris Pearson in a junior middleweight bout.

It’s no secret that El Harrak is being cast as merely the “opponent” for Pearson and not a legitimate threat to beat the rising prospect. El Harrak hasn’t fought since May 2014, when he earned a draw against Luis Grajeda. His previous two bouts were stoppage victories in 2013 over Bernardo Guereca and Paul Mpendo, both fighters with losing records. El Harrak knows what he’s getting into. From the Santa Clarita, Calif., Signal:

Pearson (11-0, 9 KOs) fights for Mayweather Promotions. He was originally supposed to fight El Harrak (12-2-2 with 7 KOs) last August, but it was one of the countless fights that has been cancelled in El Harrak’s seven-year professional career.

El Harrak said he can’t even count how many times he has been disappointed by a fight falling through.

Things got so bad, that he was about to quit in February.

And he doesn’t care if one thinks this story might be a little hokey, but a dream kept him in the game.

“I always envisioned the night (in boxing) I could never ever replace or imagine, but I was thinking about quitting,” El Harrak begins. “In this dream, there were two rings. There was a man with no arms and no legs. He had stubs. He was shadowboxing. He was working hard. I was looking at him amazed. This man is incredible. In another ring I saw a man in a wheelchair. He didn’t look sad or down. He was making the most of what he had. I woke up and took it like a message. Like something beautiful will happen.”

The boxer known as “The Messenger,” became reinvigorated and hired a strength coach. Then the phone rang and he was asked by a promoter if he would take the fight against Pearson.

El Harrak has sparred with Pacquiao in the past, and has been trained by Mayweather’s father. He picks the world’s top-ranked pound-for-pound fighter to prevail against Pacquiao on Saturday.

Regarding his own fight that night, El Harrak says, “Leading up to a fight, I fear losing. But once I get to the arena, I feel in the ring I’m going to destroy the person. I know I’m coming in here to seek and destroy. I’m training my (butt) off to win, and I’ll die trying.”