It would not be a stretch to say that every Muslim living in a country on this planet that does not have a majority-Muslim population — especially in liberal Western nations in Europe and North America — is confronted daily with a slew of images that test their ideals of modesty as well as their desire to keep a pure mind and soul.

This includes the Muslim sports fan.

Watching a football game on TV means exposure to scantily-clad cheerleaders, as well as beer and car commercials featuring even more scantily-clad models. A track and field meet features female and male athletes wearing outfits that, while understandably aerodynamic, still display awrah — body parts which should remain covered according to the Holy Quran and Islamic teachings.

Boxing, a sport which probably has one of the highest participation rates (behind soccer) among Muslim athletes, is ironically one of the worst offers in this regard.

Male and female boxers typically compete in gear that would be considered immodest or un-Islamic. (15-year-old amateur fighter Amaiya Zafar is currently petitioning USA Boxing to allow her to box while wearing hijab.) Professional boxing cards are often sponsored by alcohol companies. Many fights are held inside casinos, and gambling is as deeply rooted in the sport as gaudy championship belts.

And then there are the ring card girls. Typically outfitted in bikinis, they are the women who stand in the ring as eye candy during pre-fight introductions and post-fight interviews, and whom enter the ring between rounds of a fight to let the crowd know which round is about to begin. From Mayweather-vs.-Pacquiao to the smallest, most rinky-dink local fight card you can think of, ring card girls and their next-to-nothing attire are a boxing tradition.

In one corner of the boxing world, however, things are changing. And that change is happening in part out of consideration for Muslims in the sport. 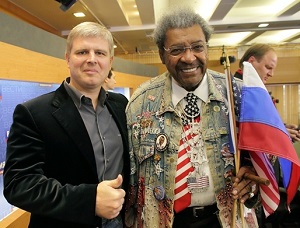 An article in the September issue of The Ring magazine claims Ryabinsky made his decision “out of respect for Muslim fans and fighters who prefer a bit more modesty with their visual aids.” Ryabinsky suggested his company’s new approach to ring card girls would be more “tasteful” and “civilized.”

Ryabinsky was also quoted by the SB Nation blog Bloody Elbow: “There are people of different cultures at our shows. We also have boxers who are Muslim, whom we treat with respect. A boxing show is not exactly the place where the girls have to walk in a bikini. We liked more restrained and solid format. This is a serious international sporting event, not a strip club.”

World Boxing Association (WBA) “regular” heavyweight champion Ruslan Chagaev is the most prominent active Russian boxer who is a known Muslim. (Wladimir Klitschko is the WBA “super” heavyweight champ.) Magomed Abdusalamov, a 34-year-old Russian heavyweight who has become known to fight fans less for his career and more for the tragic aftermath of the brain injuries he suffered during a match in 2013, is also Muslim.

One of Ryabinsky’s former clients, retired former heavyweight champion Nikolai Valuev (an Orthodox Christian), has spoken out in favor of the promoter’s decision to create a boxing experience that is more inclusive to a wider fan base. Also supporting the decision is Povetkin’s manager, Vladimir Hryunov.

“There is such a thing as cultural differences and priorities,” Hryunov said. “The most important thing is the viewer.”