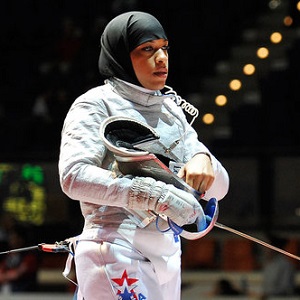 Here are the write-ups from the article:

Ibtihaj Muhammad
Who thought Muslim women would take their turn in fencing? Meet Ibtihaj Muhammad, the first female Muslim American fencer in the world. Her achievement seems to extend beyond her muslim identity: she is also ranked as one of the best female fencers in the world, reserving her place as an Olympian in the upcoming Olympics; “It’s always been my dream,” Muhammad remarks. Just this year she has gathered several awards for her performance and skill, and also an award as one of the top 10 Muslim women of 2015. En garde!

Aseel Shaheen
From judging in a court to officiating on a tennis court, Muslim women seem to be ruling the courts! Meet Aseel Shaheen: the first Arab Muslim woman to have officiated in Wimbledon deserves her place in the top 10. Just this year, Aseel Shaheen was given yet another role as an officiate at Wimbledon. What is so inspirational about this, is the fact that despite the spectators’ initial remarks, her presence has been well accepted across the tennis court and amongst the viewers, It’s this sense of agreeability and open-mindedness to see Muslim women as capable as any other officiate that open many more opportunities for Muslim Women across any field.