Tunisia’s Ghribi rewarded for career year on the track 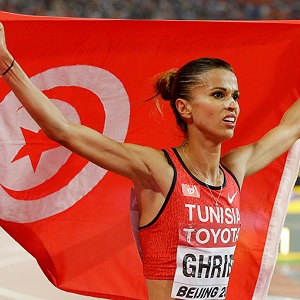 Habiba Ghribi, a Muslim track and field star from Tunisia, capped a stellar 2015 campaign by being named Arab Female Athlete of the Year by the Arab Sports Journalists Union.

At the IAAF World Championships in Beijing last summer, Ghribi earned the silver medal in the women’s 3,000-meter steeplechase. It was the most visible moment of an outdoor season in which she set an African record, posted the fastest steeplechase time in the world for the year and the second-fastest time in history at 9:05.36.

During the winter indoor season — the first time she’d run an indoor season in a career that began as a cross country runner — Ghribi set a national record of 8:46.61 in the 3,000-meter run in her first indoor race.

Ghribi, 31, is already one of the most accomplished athletes in Tunisian history. (Distance runner Mohammed Gammoudi won four Olympic medals — one gold, two silvers and a bronze — in the 1960s and ’70s.) Ghribi is the first from her country to win medals at the World Championships and Olympics. At the 2008 Olympics, she became the first Tunisian woman to make an Olympic final. At the 2011 World Championships she not only made the final but won the silver medal, a feat she repeated at the 2012 Olympics.