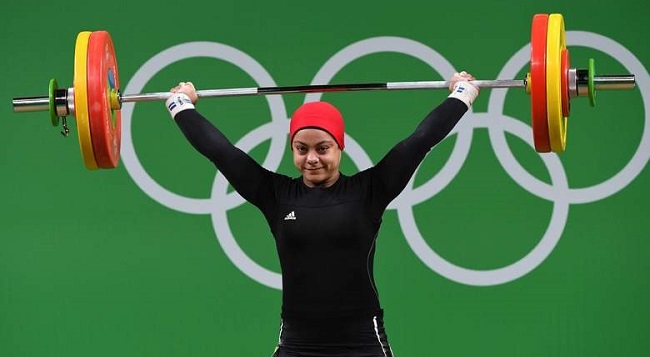 Sara Ahmed of Egypt competes in weightlifting at the Rio Olympics.

Ahmed won the bronze medal in the 69-kilogram (152-pound) division of the women’s weightlifting competition on Wednesday, becoming the first Arab woman and the first Egyptian woman to reach the medal podium in Olympic weightlifting.

Competing in a hijab headscarf and full-body unitard — attire that fits Muslim tradition but had been prohibited by the International Weightlifting Federation until the rules were changed in 2011 to be more inclusive — Ahmed lifted a combined weight of 255 kilograms (562.1 pounds) to finish just four kilos behind silver medalist Zhazira Zhapparkul of Kazakhstan. Xiang Yanmei of China won the gold medal.

In the 2012 Olympics in London, Egypt’s Abeer Abdelrahman finished fifth in the women’s 75-kilogram division. She did not take the medal stand, but due to athletes who finished ahead of her later failing drug tests and receiving suspensions, Abdelrahman is in position to receive a silver medal if those athletes are ultimately stripped of their medals. 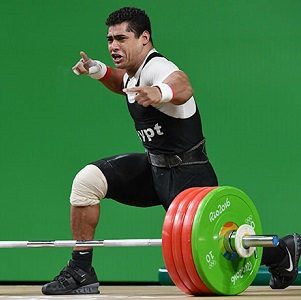 Mahmoud lifted a combined weight of 361 kilos (795.8 pounds), setting an African record with his 165-kilo (363.7-pound) snatch and completing a 196-kilo (432.1-pound) clean-and-jerk. Nijat Rahimov of Kazakhstan claimed the gold medal, while Lu Xiaojun of China won the silver.

Upon taking the medal stand to receive his bronze, Mahmoud knelt down to perform the sujud prostration to Allah.

Mahmoud adds the Olympic bronze medal to the two silver medals he’s earned at the World Weightlifting Championships from 2014 and 2015. He is the first Egyptian male to win a weightlifting Olympic medal since 1948.

Hijab — Veil or Cover. Traditional style of clothing for Muslim women which covers the whole body except the feet and hands.

Sujud — The position in Muslim prayer in which one prostrates with his hands, knees, feet, and face touching the ground.