Enes Kanter is the most interesting story of the NBA playoffs 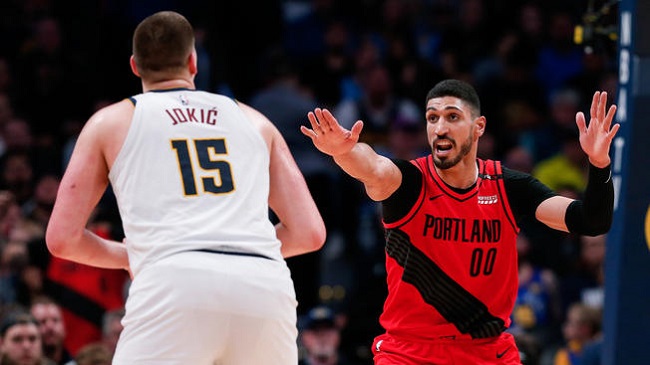 Whether they’d like to admit it or not, the reality for a lot of NBA fans and media is that the 2019 playoffs have not been as interesting without LeBron James involved.

The man widely recognized as the face of the league — if not still its best player at age 34 — is sitting out the postseason for the first time since 2005, thanks to his Los Angeles Lakers finishing the regular season with a losing record.

LeBron’s absence and the lack of daily polarizing arguments he generates has created openings for other players and teams to capture the public’s attention. Those who are stepping up and into the spotlight include Giannis Antetokounmpo of the Milwaukee Bucks, Kawhi Leonard of the Toronto Raptors, Damian Lillard of the Portland Trail Blazers, and of course the two-time defending champion Golden State Warriors led by Stephen Curry and Kevin Durant.

A teammate of Lillard’s who is making headlines off the court more than on the court is Blazers center Enes Kanter, a practicing Muslim of Turkish nationality who has helped Portland reach the Western Conference Finals against the Warriors.

Kanter made himself a pariah in Turkey a couple of years ago when he began publicly criticizing the Muslim-majority country’s government.

Turkey has since revoked Kanter’s passport, some of his family members have disowned him, and Kanter has not traveled outside of the U.S. for fear of his safety and freedom. Turkish prosecutors have made it clear that Kanter would face criminal charges if he were extradited.

The strife with Turkey has resurfaced in many U.S. media outlets in these playoffs. First, when it was reported that Turkish television stations have refused to air Portland games because of Kanter.

Then more recently, when it came to light that if the Blazers advance to the NBA Finals and have to play the Raptors, Kanter might have some trouble crossing the Canadian border to play in Toronto due to his passport issues.

“All these NBA fans, they want to watch the Western Conference Finals, but they can’t all because of me. It’s funny and crazy,” Kanter told the Washington Post. “(The Turkish government) is afraid of an NBA player.

“I’m not a politician. It’s not my job, but everyone is so scared of (President) Erdogan that I have to step up and speak out for freedom and human rights. It shows it’s a dictatorship in Turkey.”

Meanwhile, in the midst of the uncertainty about his playing status moving forward, Kanter is observing the fast for the Muslim holy month of Ramadan.

Muslim athletes, including NBA players, have over the years taken different approaches to Ramadan if it falls during the season. Some observe the fast, some don’t. Each athlete’s decision is theirs to make and not ours to criticize; most people can’t truly comprehend what a high-level athlete would be putting their body through to abstain from food or water during daylight hours at a time when they are training or in competition.

Two of Kanter’s teammates with the Blazers, power forward Al-Farouq Aminu and center Jusuf Nurkic, are also Muslim. Neither has been public on whether or not they are observing the fast this month.

Fasting for Ramadan also means Kanter is not taking medication for an existing shoulder injury, so he’s playing through the pain.

Even with the physical and mental strain of his current situation, Kanter is producing on the court.

He is averaging 12.1 points and 10.6 rebounds per game during the playoffs, shooting 51.1 percent from the field as the Blazers’ starting center. He helped Portland get past the Oklahoma City Thunder in the first round, who have massive 7-foot, 265-pound Steven Adams at center. In the second round, Kanter helped the Blazers defeat the Denver Nuggets, whose center is 7-foot, 250-pound All-Star Nikola Jokic.

If Portland can come back from the 0-2 series deficit they are currently in against the Warriors, the franchise will make its first NBA Finals since 1992, and Kanter will play in the NBA Finals for the first time in his career.