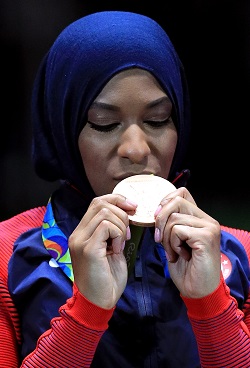 As many star athletes do for their people, Ibtihaj Muhammad has become a symbol and a spokesperson for Muslim Americans.

Muslim athletes whose opinions were sought during the 2016 Presidential campaign of candidate Donald Trump are answering questions from the media in 2017 about President Trump’s proposed travel ban on individuals from certain Muslim-majority countries. Among the Muslim athletes who have publicly condemned the ban are NBA center Enes Kanter, retired NFL lineman Ryan Harris and British track and field legend Mo Farah.

Muhammad, who was very public in her opposition to Trump’s rhetoric during his campaign, recently wrote an open letter to the president for TIME magazine:

Representing the United States in the Olympic Games was the greatest honor of my life. I will never forget walking into Opening Ceremonies behind our American flag that I revere surrounded by my teammates. Each drawn from different sports, many of different faiths and various ethnicities. Yet, in that diversity was America itself: united by love for our country.

My story is a quintessential small-town-America story. In my hometown, Maplewood, New Jersey, the question was always which sport I would play, not whether I would play one. My point isn’t really about sport, it’s about opportunity — the opportunity to strive for and believe in one’s own destiny. That is what made America’s story so unique from any that preceded it, and mine and every other American’s as well.

I love America because of the simultaneous idea that we are both exceptional and flawed — as individuals and a nation — and, that it is our collective responsibility as a people to honor each other’s potential.

That is why I am writing you this letter.

I am the picture of the American Dream — a public school kid, with loving parents who told me that with hard work and perseverance, I could be whatever I wanted to be. By believing in myself and refusing to take no for an answer, I have broken barriers and shattered stereotypes. I was the first Muslim woman to represent the United States in the Olympic Games wearing hijab. I was blessed to win an Olympic medal alongside my team at the Rio Games. I was a black Muslim woman in a little known sport. And on the world’s biggest stage, I defied labels and showed the world that being Muslim was also being American.

And yet, when I listen to you, I feel that the story you tell paints another picture entirely. You seem to see refugees fleeing terror as terror’s root, rather than refugees as terror’s victims. You seem to see our nation’s contributions to refugee resettlement as “bad deals,” rather than as shining examples of what America has always stood for. You seem to see the hijab I wear as a signal of threat and cause for fear. You’ve said, “I think Islam hates us.” That is not only wrong, it provokes fear and hatred, and as we have seen it also provokes violence against Muslims and our places of worship. Surely that was not your intention — I do not want to believe that. Yet I feel that you and your administration see me and people like me not as fellow Americans, but as “others.” Your ban on travelers from Muslim-majority countries and Syrian refugees has implications that are felt far beyond the countries listed. I am referring to implications not only in the courthouse, but in line at Starbucks. Not on the nightly news but in the night terrors of children who wonder if their home and parents, are safe. Is this what you intended when you took your oath to uphold the Constitution of the United States?

The climate of fear and hatred fueled and perpetuated by your campaign is gaining momentum through your actions in office. Since your election, I have been “profiled” at the airport, accused of looking “suspicious” and, on the streets of New York, I have been told to “go back to my country.” This isn’t the America that I know and it isn’t the America that the world looks to for inspiration and leadership.

There are 3 million American Muslims. They teach our children, treat our sick, fight our wars, and despite your attacks, continue to stand proudly on the front lines of keeping all Americans safe. My faith calls on me to help the less fortunate and speak out against injustice. President Trump, look at the math: we do not have a refugee terrorist problem. It simply doesn’t exist. But, I do fear a not-so-subtle campaign of terror now being waged on our American ideals of justice and equality.

The Olympic Movement chose its symbol of interlocking rings of many different colors to demonstrate humanity’s unity . Sport has always been an equalizer and a symbol of peace, even in the ancient Games when wars would cease for the competitions. Indeed, as much pride as I take in being one of America’s firsts, what I most love about my Olympic experience is that my success was born out of my opportunity, freedom and liberty as an American.

Overcoming obstacles was my challenge as an athlete. It is now my challenge as a citizen. I once represented you. Now you represent me. I urge you to do so with the humility, thoughtfulness and kindness befitting your sacred office. As an African-American Muslim Woman patriot, my religion commands me to remain hopeful, to believe in our ability to fight bigotry with love and draw our strength from diversity. That is what makes America great. Time and again.